Marvel Studios released the teaser trailer for Guardians of the Galaxy earlier this week, and if that wasn’t enough we have the first teaser poster that debuted today. Equipped with only the tag line of “You’re Welcome,” Marvel is definitely positioning Guardians of the Galaxy as one of the most ambitious films of their Cinematic Universe. Check out the full, hi-resolution teaser poster for the movie after the break.

For a group of heroes that is less known in the mainstream, Marvel is certainly putting on an interesting marketing campaign to introduce Guardians of the Galaxy. It’s a pretty ballsy move. And although the teaser does a great job at giving us a taste of what we’re in for, the poster is a bit generic. Sure it’s just a teaser, and I am more amazed by the tagline than the actual artwork of it, but I feel there needed to be a larger statement with the artwork to compliment the bold tagline.

They used a quarter of the poster space just to say they are the studio that brought us The Avengers, Captain America, Thor, and Iron Man – The Incredible Hulk is left out for some odd reason regardless of his popularity in The Avengers. Is it really necessary to reinforce that fact? The film did make over a billion dollars worldwide. That area could have been better utilized to present a more visually appealing poster than just the characters standing in front of  spaceship. Let’s see what they can come up with in the next poster. If it’s anything like the trailer and this tagline, I expect greater things to come.

(Click on the poster for a larger, hi-res image) 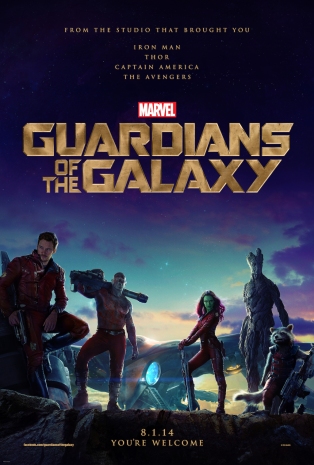 Here’s the run down of what to expect from Guardians of the Galaxy:

An action – packed, epic space adventure, Marvel’s Guardians of the Galaxy expands the Marvel Cinematic Universe into the cosmos, where brash adventurer Peter Quill finds himself the object of an unrelenting bounty hunt after stealing a mysterious orb coveted by Ronan, a powerful villain with ambitions that threaten the entire universe. To evade the ever-persistent Ronan, Quill is forced into an uneasy truce with a quartet of disparate misfits — Rocket, a gun – toting raccoon, Groot, a tree – like humanoid, the deadly and enigmatic Gamora and the revenge – driven Drax the Destroyer. But when Quill discovers the true power of the orb and the menace it poses to the cosmos, he must do his best to rally his ragtag rivals for a last, desperate stand — with the galaxy’s fate in the balance.