Rounding out the weekend of April 20, 2014, Captain America: The Winter Solider dominated over its competitors again, leaving the box office battlefield victorious. Box Office Aftermath is an ongoing column dedicated to recapping the weekend’s total ticket sales. Each week, combatants enter the cinematic war zone, bloodthirsty for your cash. But there can only be one true winner. In Box Office Aftermath, we will take a look at the numbers, how previous contenders fared, and provide a brief analysis of the results.

As I had predicted, Rio 2 did not hold out as well as its predecessor and allowed for Captain America: The Winter Soldier to take the top seat at number one. But there is another factor that helped Marvel Studios obtain the top spot. Thanks to Easter weekend, it would appear as the faithful were very interested in seeing Heaven is for Real, residing over Rio 2 to take second place and the animated feature fell to third.

Heaven is for Real is a stupid name for a movie, but it earned $22.5 million this weekend. This puts three faith based movies in the top 15 for the weekend. I could only suspect that there will be another wave of these, much like young adult movies lately. For director Randall Wallace, this is his highest grossing opening weekend ever, above Secretariat, The Man in the Iron Mask, and We Were Soldiers.

Rio 2 took a 43.7 percent drop in viewership in its second weekend; compared to Rio’s 33 percent decline. The animated feature earned $22.1 million this weekend.

Also debuting this weekend was Transcendence, which bombed gloriously as if it doused itself in gasoline and lit the match. Grossing only $10.88 million in its first weekend, with a reported budget of $100 million, Transcendence can be put in the books as a bonafide failure. The scathing reviews and glossed over, convoluted plot did not sit well in audiences’ stomachs. Even Dark Shadows did better than Transcendence. Johnny Depp, you’re outta here. At least you have Amber Heard.

Rounding out the top five is A Haunted House 2, proving there are many sadists out there. Scoring $8.84 million, the low-budget horror parody continues to provide hope for my stupid movies of its genre. Please, stop this people, we are the only ones who can tell them “no” and you keep buying tickets. Why?

In its second weekend out, Draft Day fell from fourth to sixth. Earning a weekend gross of $5.71 million, Kevin Costner’s film is not doing too well, but has the positive reviews to keep it afloat.

Because there are movies like Oculus, which also is in its second weekend and fell from third to eighth. Dropping almost 60 percent in audience retention, the horror thriller took home $5.15 million. Sure the low-budget horror has a nice ROI, but still not doing too well compared to other low-budget horrors like The Purge or Saw.

And finally we have Bears. The DinseyNature flick earned $4.77 million this weekend, which a portion of that will go to the National Parks. No percentage of the ticket sales is confirmed, but even one percent is about $50,000. I would hope, and suspect, at least 10-percent will be donated.

(Click the image below to enlarge the charts. All figures are domestic box office results.) 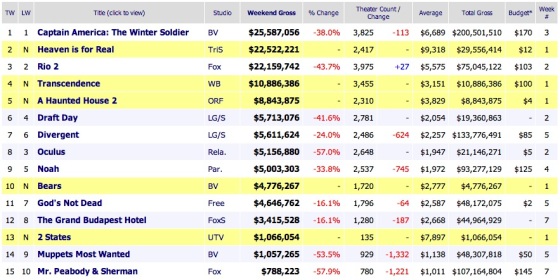 Until the next weekend bout, this has been your Box Office Aftermath.
–