Rounding out the weekend of June 15, 2014, 22 Jump Street dominated over its competitors, leaving the box office battlefield victorious. Each week, combatants enter the cinematic war zone, bloodthirsty for your cash. Box Office Aftermath is an ongoing column dedicated to recapping the weekend’s total ticket sales.

Overtaking all competition, Chris Miller and Phil Lord wowed audiences with their meta sequel comedy, 22 Jump Street. Earning Sony Pictures a whopping $57.07 million in its first weekend, 22 Jump Street is the second highest opening weekend gross for an R-rated comedy ever – right behind The Hangover: Part II ($85 million). This opening gross is way ahead of its predecessor, 21 Jump Street, which made $36 million in its first weekend. After this impressive show, always bet on Lord/Miller.

Sadly, How to Train Your Dragon 2 had a disappointing opening weekend. Families must have been too busy this Father’s Day weekend to get out to the movies. With almost more than 1,000 screens over 22 Jump Street, and in 3D and IMAX 3D, How to Train Your Dragon 2 could be looked at as a failure. Critically and commercially the movie is being highly praised, so it is odd to see the film under perform so poorly. HTTYD2 did open better than the original, but not by much – HTTYD opened with $43 million. However, HTTYD went on to have an amazing life in theaters that had solid longevity to earn itself $217 million domestically and $494 million worldwide, before leaving theaters.

Falling one spot to third is Maleficent. Surprisingly in its third weekend, the live action Disney adventure only fell 46 percent and beat out two other films that are in their second weekends, The Fault in Our Stars and Edge of Tomorrow. By next weekend, Maleficent should cross the $200 million line.

Holding on strong this weekend was Edge of Tomorrow. Thanks to positive reviews and sheer word of mouth, Tom Cruise and Co. were able to snag $16.56 million. Comparatively, Tom Cruise’s sci-fi feature last year, Oblivion, fell 52 percent in its second weekend. Edge of Tomorrow is now at $56 million and is expected to hit $100 million by the time it makes its exit. The film has now made $238 million worldwide, which makes up for its hefty $178 million production budget.

(Click the image below to enlarge the charts. All figures are domestic box office results.) 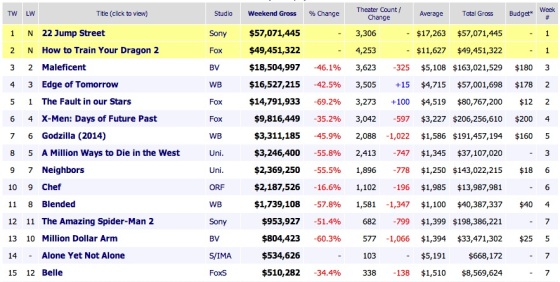