We are giving away a Blu-ray combo pack of The 100 (Season 1) just in time for the Season 2 premiere next week. For those who deem the apocalypse to be a bad thing, not to worry, it’s filled with beautiful people. As one of the more original series on The CW, The 100 is a unique little show to check out. Find out how you can win after the break.

(THIS CONTEST HAS ENDED. CONGRATULATIONS TO MARY H.!)

Open to U.S. residents only. This sweepstakes ends on Saturday, October 18, 2014 at 12:00 am PST. One winner will be chosen at random and will be announced the following day. (If you do not respond within 24 hours of us announcing you as the winner, another winner will be chosen, and so on and so forth.)

Only one entrant per mailing address per giveaway. Winner is subject to eligibility verification.

For a chance to win The 100 Season 1 on Blu-Ray, which includes a Digital HD download, all you have to do is click on the box cover art below and follow the instructions on our Facebook page: 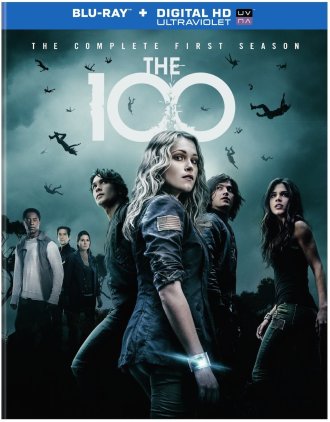 CLICK ON THE IMAGE ABOVE FOR YOUR CHANCE TO WIN!

Good luck and thanks for participating!

The special features on the second season Blu-ray set of The 100 includes:

Here is the official plot synopsis for The 100 courtesy of Warner Bros. Home Entertainment:

Ninety-seven years after nuclear Armageddon destroyed our planet, humanity’s sole survivors live on the Ark, an aging space station experiencing overpopulation and inadequate resources. When faced with difficult choices, the Ark leaders—chief medical officer Abby, Chancellor Jaha and the mysterious Kane—decide to send 100 juvenile prisoners back to Earth to test its living conditions. Among them are Clarke, Abby’s bright daughter; Wells, Jaha’s son; the daredevil Finn; and siblings Bellamy and Octavia. With the survival of all in their inexperienced hands, The 100 young people must learn to rise above their differences and forge a new path on a wild and dangerous landscape that teems with radioactive waste, turbulent weather and unimaginable predators…or face the ultimate extinction of the human race!

The complete second season of The 100 is now available to own on Blu-ray. Season 2 begins on Wednesday, October 22 on The CW at 9/8 pm CST.