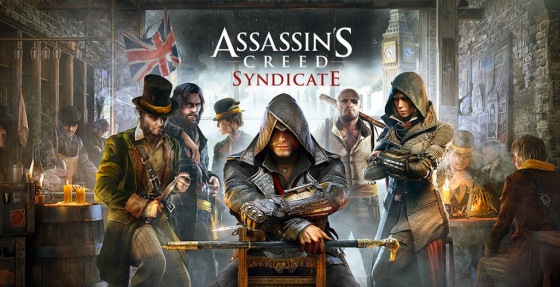 Get ready for some good ol’ fashioned British pub brawls because Ubisoft is taking Assassin’s Creed fans to jolly ol’ 1868 London. The newest installment of the acclaimed blockbuster franchise, Assassin’s Creed: Syndicate, was announced officially today. During the height of the Industrial Revolution, players will embody two new, twin assassin’s by the name of Jacob Frye and Evie Frye. Learn more about this dynamic duo and watch the announcement and gameplay walkthrough trailers after the break.

It’s amazing how far we’ve come in the Assassin’s Creed franchise. What started off as a fun romp in 2007 has expanded so much within our time and the historical periods represented in the story. Every year we see the further advances of technology creep into the weaponry, but also the environments in which the games inhabit. This could be a very fun and ambitious new entry into the franchise, and I look forward to seeing what more will come of it.

As you can see in the video above, Assassin’s Creed: Syndicate will offer gamers the chance to play as Evie Frye, the first game in the main series that allows players to take on the role of a female assassin. A lot of hubbub was stirred last year with the release of Assassin’s Creed: Unity because there had still not been a female protagonist in the series up to that point. Well here she is.

This new installment comes across just as big as Unity, but on land this time with seven boroughs of London to explore. I like how stealth mode is enabled by putting away your top hat–I feel as though it should be the opposite so when you’re about to assassinate someone it would be more formal and gentlemanly.

The rope launcher is pretty much ripped from the Batman: Arkham series, but the same could be said looking the other way in that a lot of gameplay mechanics have been taken from AC in creating B:A. I’m glad to see that the environment can now be used to dismantle enemies, you’d think that would have been possible earlier on. And on one final note, that rumble between the two groups reminded me of Martin Scorsese’s Gangs of New York.

So to recap, the new features in this game include:

And here’s the official plot synopsis for Assassin’s Creed Syndicate, courtesy of Ubisoft:

London. 1868. The Industrial Revolution. An age of invention and prosperity, built on the backs of working class slaves. As gangster assassin Jacob Frye, you will recruit your gang to fight for justice on behalf of the oppressed working class. Lead the underworld to take back London in a visceral adventure filled with action, intrigue and brutal combat.

Developed by Ubisoft Quebec, Assassin’s Creed: Syndicate is directed by Marc-Alexis Côté and will be available worldwide on October 23 for PlayStation 4 and Xbox One. The Windows PC version will be available this fall.

Find me on the Twitters at @TyRawrrnosaurus