This weekend a quirky little film about two individuals who are faced with a decision that will change their lives forever will release – Stand Up Guys featuring a bromance between Christopher Walken and Al Pacino. Just kidding, I’m talking about Warm Bodies. If the trailer wasn’t enough for you, there are eight movie posters after the break that tries to convince you that it has more brains than its lead character had for lunch.

It just so happens that Warm Bodies made my list of most anticipated horror movies of 2013, and for good reason. Having already seen the film, I know that there is a lot of heart and humor throughout the 97-minute run time. Despite it being an adaptation of a book, that is a re-imagining of Romeo and Juliet – the lead characters are R and Julie – it maintains a unique voice and never over steps its bounds to become the next Twilight as many fear it will be.

The posters we have here are minimalistic, much like the film, but they introduce the wit I was talking about. You’d roll your eyes at most posters like these and move on, but something about the taglines speak louder than a simple groan. The marketing team has done a wonderful job, embracing the campyness of the plot and twisting it in to something cute and catchy. You can’t play the same game with The Walking Dead because of how bleak the tone is. Warm Bodies invites you to have a good time with and these posters captures the voice of the movie very well. Click on the images below to enlarge the posters: 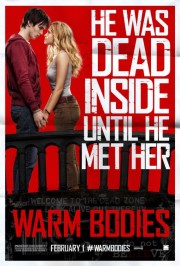 Starring Nicholas Hoult and Teresa Palmer: R (a highly unusual zombie) saves Julie from an attack, the two form a relationship that sets in motion a sequence of events that might transform the entire lifeless world.