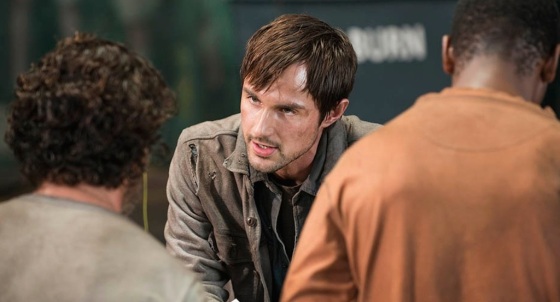 It goes without saying that The Walking Dead Season 5 kicked off with a bang, literally and figuratively. As the show hits record ratings, AMC would like to share with you the first four minutes of the season premiere. One of the most intense scenes of the entirety of the show thus far, this opening sequence set quite the brutal path for our survivors. Check it out after the break.

For those who have seen this past weekend’s episode, which most probably have already, it would be hard pressed to say that the actions following this four minute clip are some of the most disturbing ever to be seen on cable television. I mean how did they get away with that? They can’t say the word “shit” but they can display a visually gruesome and terrifying death scene. How does that work FCC? Just one more reason we can continue to hate the MPAA because something like this can be shown to the masses without restrictions, but a film like The Conjuring can be rated R for “sequences of disturbing violence and terror.” Give me a break.

With 15 more episodes to go, I’m not sure how they can top what we have scene thus far. We haven’t seen a main character death in quite some time, which one could only imagine how they’ll go out. After the premiere episode, not only will fans riot if Daryl dies, but now Carol too. “No Sanctuary” certainly set up the fifth season on a high note that Scott Gimple and Robert Kirkman can keep up with.

Here is the official plot synopsis for Season 5 of The Walking Dead, courtesy of AMC:

Season 5 picks up shortly thereafter. What follows is a story that weaves the true motives of the people of Terminus with the hopeful prospect of a cure in Washington, D.C., the fate of the group’s lost comrades, as well as new locales, new conflicts, and new obstacles in keeping the group together and staying alive.

Stories will break apart and intersect. The characters will find love and hate. Peace and conflict. Contentment and terror. And, in the quest to find a permanent, safe place to call home, one question will haunt them:

Who do they become?

The Walking Dead Season 5 premieres on Sunday, October 12 at 9/8c only on AMC.