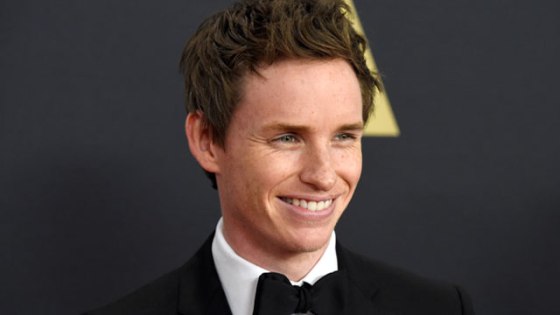 In the grand world of wizarding news today, it was officially announced that The Theory of Everything and Jupiter Ascending star Eddie Redmayne has been cast as Newt Scamander in Fantastic Beasts and Where to Find Them. Set in 1920’s New York, Redmayne will be front and center as the lead of what is set to be a new trilogy of movies. Learn more after the break.

As if J.K. Rowling didn’t have enough gold-plated dinnerware, this Harry Potter spin-off will be quite the interesting project to follow. The fan base is certainly there for Harry, Ron, and Hermione, but will the interest level be high enough for an unknown character that wasn’t fleshed out over the course of seven novels? Newt Scamander was only but a name on a textbook before Rowling wrote a physical copy of “Fantastic Beasts” for Comic Relief, a benefit that would receive 80% of the cover price of each book sold to help serve underprivileged children around the world.

I like the idea of returning to the wizarding world, but I’m sure many have their cautionary optimism as spin-offs never tend to fair too well. Changing up the setting from the United Kingdom to 1920’s New York sounds quite jarring, but I don’t believe it will feel as strange as it may seem. The characters roaming the halls of Hogwarts and Diagon Alley already felt like a time long ago, and they never resorted in using modern technology. The most fun about this film be watching Newt scour New York for magical creatures in a muggle setting and what kind of wizards lived in the U.S.

President of Creative Development at Warner Bros., Greg Silverman, spoke regarding the casting today, stating Redmayne “emerged as one of today’s most extraordinarily talented and acclaimed actors,” and then added that the studio is “thrilled to welcome him into J.K. Rowling’s Wizarding World, where we know he will deliver a remarkable performance.”

The magizoologist led quite the life amongst the wizarding world. According to the Harry Potter wikia, he was born in 1897 and developed an affinity for magical creatures as his mother was a hippogriff breeder. He would attend Hogwards School of Witchcraft and Wizardry from 1908 to 1915. After graduation he joined the Ministry of Magic and worked in the Department for the Regulation and Control of Magical Creatures spending two years relocating elves before transferring to the Beast Division. And then in 1918, Scamander was commissioned to write the first edition of “Fantastic Beasts and Where to Find them,” which would publish in 1927. In the Harry Potter films, a portrait of Scamander is seen in the Dumbledore’s office, implying that he was a past Headmaster of Hogwarts at some point in his life and that he passed away by 1992.

Directed by David Yates, from screenplay written by J.K. Rowling herself, Fantastic Beasts and Where to Find Them hits theaters November 18, 2016 in 3D and IMAX.