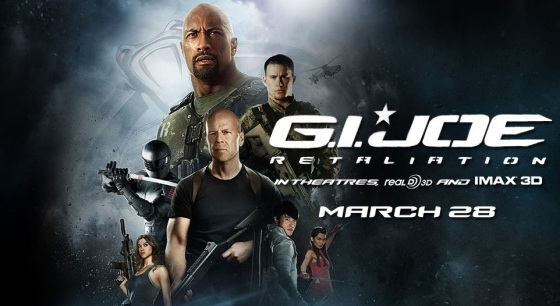 From the director that brought you Justin Bieber: Never Say Never and the incredible Step Up 2: The Streets, Jon M. Chu brings audiences G.I. Joe: Retaliation. The trailer promises the same level of action and cornball jokes, but at least they don’t bring out the accelerator suits again. Check out the full trailer for G.I. Joe: Retaliation after the break.

G.I. Joe: Retaliation looks to be very toned down compared to its predecessor. The silly, aforementioned accelerator suits are gone, the action doesn’t seem to be wrecking havoc throughout the streets, no mid-air battles are apparent, and there is no underwater secret lairs. It appears they’ve kept it fairly simple.

Despite G.I. Joe: The Rise of Cobra being absolutely horrendous, Retaliation looks like fun. In fact, I’m excited at the very thought that they’re using Cobra Commander’s real mask/helmet instead of that awful whatever you want to call it that they had Joseph Gordon-Levitt wearing in the first film. Throw in more C-Tates, The Rock, and ninjas and you’ve got yourself a funtastic time. And hey, this movie looks like it could be even good in 3D too!

Everything about this trailer is slick and ready for enjoyment. I have to wonder what went wrong for it to be delayed for a year. How bad could it have been? The studios claim it was to add 3D, but many reports can confirm that it was to add more screen time for Channing Tatum. How much Channing Tatum could they inject in order to make it better?

As you can tell, Dennis Quaid (General Hawk), Joseph Gordon-Levitt (The Doctor), Marlon Wayans (Ripcord), Adewale Akinnuoye-Agbaje (Heavy Duty), Christopher Eccleston (Destro), Rachel Nichols (Scarlett), and Sienna Miller (Baroness) are all absent from this one. I cannot tell if that’s a good thing or a bad thing, but there doesn’t seem to be as many big G.I. Joe characters this time.

The G.I. Joes are not only fighting their mortal enemy Cobra; they are forced to contend with threats from within the government that jeopardize their very existence.

My biggest beef with this trailer is that they clearly shows the weapon in space blowing up. WHY WOULD YOU SHOW THAT IN YOUR TRAILER? You can tell that they want to make it the top threat in the movie, so why show it blowing up? That’s a pretty terrible choice in picking clips to show in a trailer if I do say so myself.