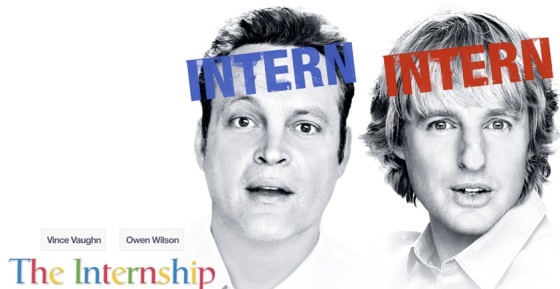 Buckle up, because if The Internship is what you seek, prepare for an overly long, two-hour advertisement for Google riddled with outdated cliches. But despite the lack of ingenuity, this film turns out a pretty harmless attempt at humor with a little dash of heart. Vince Vaughn and Owen Wilson put in a great effort, but the once famed Wedding Crashers duo are hardly given enough room to grow.

After being let go from their wrist watch company that went under, Billy McMahon (Vince Vaughn) and Nick Campbell (Owen Wilson) are labeled as dinosaurs, struggling to find a place in the world. Hounded by his sister to grow up and get married, Nick picks up a job at mattress retailer. Meanwhile, Billy comes to find his house under foreclosure with his long-term girlfriend leaving him to find his way. From having it all to hitting rock-bottom, the two salesmen find themselves in quite the pickle.

Desperate, and apparently with no other options, Billy decides to enroll Nick and himself into The University of Phoenix in order to gain an internship with Google, that may or may not lead to employment. Convinced to take a leap of faith, Nick joins Billy in a video conference interview with the prestigious billion-dollar corporation. And wouldn’t you know it, they nailed their interview in spite of their technological shortcomings.

Arriving on Google’s well-branded campus in northern California, Nick and Billy come to find they may be over their heads. Every Googler is connected to a device and in-tune with the modern age, while Billy has a hard time figuring out how to be “on the line.” Having to pair off into teams during orientation, the duo join with a band of intellectual misfits also deemed unworthy of their talents by the rest of the interns.

The socially awkward Lyle (Josh Brener) leads the rest of the group who consists of the cynical and distant Stuart Twombly (Dylan O’Brien), the sexually frustrated and geeky Neha Patel (Tiya Sircar), and the homeschooled, over-protected Yo-Yo Santos (Tobit Raphael). This ragtag team of “Nooglers” – new Googlers – must work together with Nick and Billy in a series of challenges if they have any hope of landing a job.

The Internship is an underdog story to its core; everyone must prove how much Googliness they have. Lyle’s group is monitored closely by the highly critical Mr. Chetty (Aasif Mandvi), who leads the internship program, unafraid to openly express doubts in Nick and Billy. But an underdog story is incomplete without its villain, which is filled in by Graham Hawtrey (Max Mingella), the overly confident and snarky rival intern. Rose Byrne also appears as a Google employee who Nick sets his heart after. Her presence is basically a waste of time and plot development.

With the pieces set in place, The Internship begins to tick off cliche after cliche from its checklist in order to drive home its not too subtle messages: Generation X cannot understand Generation Y, the economy is tough on college graduates in today’s job market, live life to the fullest, be yourself, and don’t be a jerk.

Vince Vaughn, who wrote the story, positions Nick and Billy well as their own characters, separating them from the those they played in Wedding Crashers, John and Jeremy. But as a comedy, the jokes fall flat. The point that Nick and Billy are from a different era than their fellow interns is beaten to death and the whole film relies on this premise to work. It’s been done before, but with much older actors.

Nothing in the screenplay demands our attention nor does it create anything new for the viewer to enjoy. The challenges our characters are tasked to complete are hardly complex or inspiring – they play Quidditch for one of them – which ends up as missed opportunities reflecting poorly on Vaughn or Googles’ creativity. One of the challenges is for the interns to develop a mobile app, and the movie dedicates an exhausting amount of time to this scenario with little pay off.

Where The Internship tends to excel is within the character development. This young cast arrives on screen fairly unknown – Tobit’s first role – yet they do a swell job at bringing their characters to life. The struggles that each one of our protagonist face creates a great team dynamic once they eventually learn to understand each other. Although director Shawn Levy (Date Night; Night at the Museum; Real Steel) fails to find a unique position on the genre, he is able to capture a positive energy that maintains a slow pulse strong enough to keep forward momentum.

Even though Nick and Billy are fantastic salesmen, Levy has a hard time selling The Internship as a film that neither surprises or excites. The bland, archaic comedy minimally tickles the funny bone yet has so much heart and good intentions it is not unbearable to ingest. The Internship is rather forgettable, but isn’t a complete failure due to the charisma of the cast and the movie’s ability to embrace some of the weirder moments that provides enough life to make it passable.

What did you think of The Internship? Let us know in the comments section below.

The Internship was directed by Shawn Levy, with a 119 minute run time. This film is rated PG-13 for sexuality, some crude humor, partying and language.