Adult Swim is proud to announce that the fifth season of The Venture Bros., one of the network’s most successful animated shows, will be available on DVD and Blu-ray on March 4.  Season 5 follows the Venture family on another series of globe-trotting adventures after nearly three years since the end of Season 4.  Hit the jump to check out what special features you can expect from this release and a quick recap of seasons 1-4.

The Venture Bros can be best described as the chronicle adventures of the Venture family made up of sub-par and fiscally incompetent super scientist Dr. Thaddeus “Rusty” Venture, his two spirited sons Hank and Dean Venture, and family body guard, secret agent Brock Samson.

Dr. Venture is the offspring of late-great Jonas Venture, head of Team Venture. He was once well known as “Rusty, Boy Adventurer”, though now has grown into man-hood and in an attempt to shed his past identity has lost his sense of thrill and adventure. The family is often faced with undesired conflict by self-proclaimed arch-nemesis, The Monarch, a butterfly-themed super villain and his companion Dr. Girlfriend. Below is a quick recap of seasons 1-4 that probably gives a more fitting description of the show and what has taken place courtesy of venturebrosblog.

What initially drew me to the show were the parallels to old animated adventure shows like Johnny Quest and Scooby Doo. However in this series they’ve grown up and have definitely fallen short of what you would have expected their lives to turn out, see Macaulay Culkin. In fact, the series features characters similar to Scooby Doo and the gang as well as a middle-aged, seemingly strung-out, Johnny [Quest]. The story of course grew into more than that and the characters began to develop as the series continued on. I’m excited to see what new ideas the creators have come up with, and what lies ahead for the Venture family. I mean, they did have about three years. Let’s hope it didn’t go to waste.

For those of you familiar with the show, and excited about the Season 5 release, here is what you can expect: 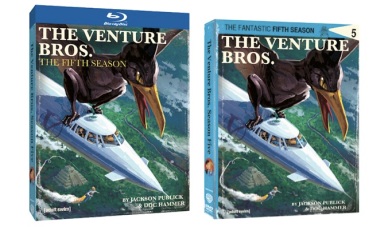 Here’s a quick synopsis of Season 5 of The Venture Bros.:

The fifth season of The Venture Bros. picks up moments after the stunning climax of season four and hits the ground running for a season of globe-trotting adventures and stay-at-home suspense. But no matter where it runs—from the steamy jungles of Central America, to the sparkling sands of the Greek Islands, to the seedy back alleys of Tangier, to the jagged cliffs of By-Golly Gulch—the Venture family can’t escape the treachery of enemies old, new, and within.