Albeit one of the silliest movie franchises of the modern age, Step Up is by far one of the most entertaining display of performance art and colorful characters. Its recent entry, Step Up All In takes the best of the franchise like Fast & Furious and brings them to Las Vegas. Releasing on Blu-ray and DVD on November 4, Digital HD October 21, check out what special features you can find after the break.

Dancers Assemble! Step Up All In is by far the most contrived and hilariously strained narrative of the bunch, but it brings back some of the best characters from each of its predecessors. Andi (Briana Evigan) and Moose (Adam Sevini) from Step Up 2 The Streets are by far the most interesting of the bunch and I’m glad to see their return. I’m not sure exactly where we can go from here, but I really hope they bring back Channing Tatum for the sixth film, if they make it.

Step Up All In Blu-ray and DVD special features includes: 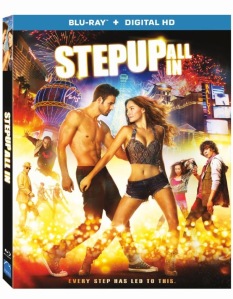 Here is official plot synopsis for Step Up All In courtesy of Lionsgate Home Entertainment:

In the next exciting chapter of the international phenomenon, Step Up all-stars from previous installments come together in glittering Las Vegas, battling for a victory that could define their dreams and their careers.

Step Up All In hits shelves on Blu-ray and DVD on November 4; Digital HD on October 21