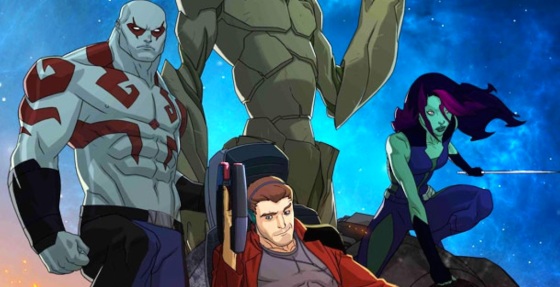 As if Marvel didn’t have enough projects going on, along with Disney XD’s upcoming Guardians of the Galaxy animated series there will also be a new “kid-friendly”comic series to boot. While the new animated series and comics will feature everyone’s favorite ragtag group of space heroes, the word on the street is that they will be unrelated to the blockbuster movie that opened this summer. Hit the jump for more details.

With all the success of James Gunn’s Guardians of the Galaxy, it seems only logical that the next step in Marvel’s plan for world domination would be to capitalize on its popularity. Animated test footage for the upcoming television series was shown at the Marvel Animation panel for San Diego Comic-Con earlier this year. Which was met with positive results. You can watch the entire panel here.

However, there seems to be a disconnect as to the content of the series. According to Marvel’s vice president of animation, Stephen Wacker, the show will, “pick up where the movie left off.” But James Gunn seems to think differently, remarking, “It’s totally separate from the Marvel Cinematic Universe and whoever said that, it pisses me off.”

It is probably safe to assume that the movie will not be following the Marvel Cinematic Universe too closely since the show will be intended for very young children, and basing it off of a PG-13 film seems like it would be rather difficult to achieve. Then again, Batman: The Animated Series was a television show for children but with very dark undertones so anything is possible. It would be safer to assume that the GOTG animated series that way you won’t get your hopes up. Without James Gunn’s support, it would be hard to mimic that kind of humor in a kids animated series.

Additionally, Marvel.com announced a new comic book for the franchise recently. The comic book will be entitled Marvel Universe: Guardians of the Galaxy and will be in the same vein; geared toward a younger audience. The comic book will be penned by Joe Caramagna, who is known for his other child-friendly comic books such as The Avengers. It definitely looks like the Guardians of the Galaxy franchise is well on its way to being cemented into American pop culture if it has not been, already.