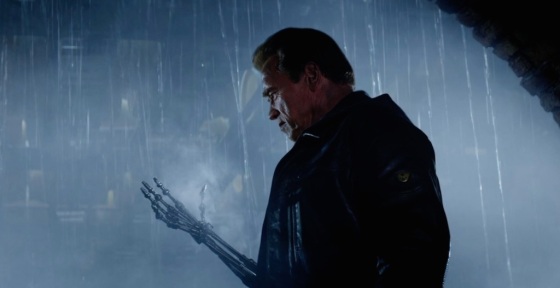 As promised, Paramount has delivered the first trailer for Terminator: Genisys. Fans will get to see Sarah Connor back in action, played by Emilia Clarke (Game of Thrones), with an adult Kyle Reese played by Jai Courtney (A Good Day to Die Hard), and the return of The Terminator himself played by Arnold Schwarzenegger. From what we can tell, this film takes a quasi-reboot/prequel spin resetting all expectations of what we know of the franchise to date. Check out the trailer and over 100 hi-res screenshots after the break.

Going in with zero assumptions as to what Terminator: Genisys is about, I am a little taken aback at what they’re trying to attempt here. The main story is still the same: future John Connor (Jason Clarke) sends Kyle Reese back to protect Sarah Connor from ultimate doom so John can be born to win the post-apocalyptic war with Skynet and the machines. However, it would appear that time travel has taken a toll with a new timeline conflicting with the old. Or at least that’s how they’re playing it off.

From what I can tell, in this timeline, a different John has sent back The Terminator to protect Sarah when she was younger and she grew up with him as her protector. But what confuses me is how did the future John not know of these events if he is sending Reese back as he did in the first Terminator? It’s a bit confusing in just a short two-minute trailer, but I hope it can be explained thoroughly enough in the final product. My only guess as to why Arnold looks like he is aging through time is because the biology of his fake organic material is aging.

I’m OK with this concept as long as this doesn’t undermine and completely diminish the good will of the first two Terminator films. Terminator 3: Rise of the Machines is a throwaway, and Terminator: Salvation is a forgotten memory. But I think they really have a chance to bring back the unique thrill of the series with new stakes if they can execute effectively.

(Click on the images below to begin the screenshot gallery)

The year is 2029. John Connor, leader of the resistance continues the war against the machines. At the Los Angeles offensive, John’s fears of the unknown future begin to emerge when TECOM spies reveal a new plot by SkyNet that will attack him from both fronts; past and future, and will ultimately change warfare forever.

And how badass is this teaser poster?

Terminator: Genisys will be released in theaters on July 1, 2015.