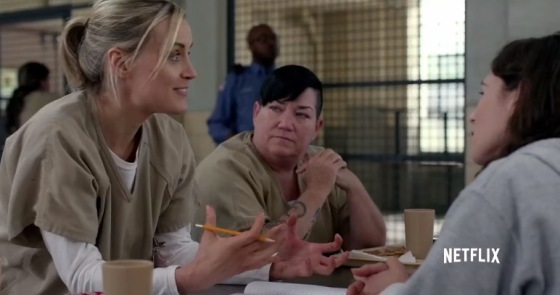 Get ready for some more chocolate and vanilla swirl as Orange is the New Black returns this June on Netflix. Today, the video streaming and home video rental subscription service unleashed unto the world a new teaser for the third season. Playing up the more playful aspects of the prison dramedy conceived by Weeds’ Jenji Kohan, OITNB fans can look forward to all their favorite characters returning for more shenanigans with 14 new episodes. Check out the teaser after the break.

There really isn’t much to go on as to what we can come to expect from the third season of Orange is the New Black in this teaser. The usual suspects are front and center, but this preview comes off as more of a recap to help fans remember recall more of the happier moments of the show rather than share with us new plot details from where we last left the show.

Season 2 had many more twists and turns than the first season, which placed less focus on Piper’ Chapman’s (Taylor Schilling) intorduction to Litchfield Penitentiary and more on the supporting cast. Having the freedom to explore more of the prison and delve deeper into who these women are, Season 2 definitely excelled the show, so I only hope Season 3 will be just as exciting.

Though fairly absent in Season 2, Laura Prepon, who plays Alex, told US Weekly that she’ll be returning as a main cast member. Alex played a dominant role in Season 1 as a somewhat antagonist to Piper whereas Vee (Lorraine Toussaint) caused a lot of trouble for Red (Kate Mugrew) in Season 2. Once we see the first actual trailer for Season 3 we’ll see who will be stirring the pot at Litchfield this time around.

Here’s the official plot synopsis for the series itself, not Season 3, courtesy of Netflix:

Orange is the New Black follows Piper Chapman as she trades her designer jeans for an orange prison jumpsuit. Starring Taylor Schilling as Piper, a Smith graduate whose decade-old love affair with drug smuggler Alex leads to her arrest and year-long detention within the walls of a women’s penitentiary. Piper leaves behind her fiancé Larry to serve her time “inside” with an eccentric group of outspoken inmates, each with her own story and her own fascinating ways of dealing with prison life.