Movie goers eagerly awaiting the release of This is the End got a very special treat at WonderCon this past weekend. With Craig Robinson, Danny McBride, and co-writer-directors Evan Goldberg and Seth Rogen hitting the stage, hilarity ensued. Those who witnessed the panel got a special preview of two clips and a green band trailer that has surprisingly not hit the Interwebs yet. After the jump, read on about my thoughts on the footage.

I was very reluctant going into this panel because I didn’t want to see footage that would ruin the movie, but it is what it is. I wouldn’t say the clips lessened the movie, but I am a bit sad I can’t experience those scenes for the first time when I see it in theaters. Still funny to watch, I hope what’s in the movie is ten times funnier than what was shown because what I saw was a knee slapper.

This is the End feels really fresh since the actors appear as themselves; some extreme versions of themselves, i.e. Michael Cera as a coke addict. During the panel discussion, it was agreed that although Michael Cera was playing himself he had the most fun not being himself. They stated a lot of improv was utilized while shooting and it looks very natural on the screen.

More depth was divulged about the story. Based on the short film created by Seth Rogen, Jay Baruchel, and Evan Goldberg – Jay and Seth Versus the Apocalypse in 2007 – This is the End harbors the same tone and premise. As they are Canadian bretheren in real life, in the movie, Jay comes to visit Seth in Hollywood and he is informed that they will be going to James Franco’s party. Jay isn’t a big fan of Seth’s Hollywood friends, but tags along anyways. That’s when the apocalypse happens and the craziness begins.

The green band trailer showed showed more character interactions with the cast we have not seen such as Paul Rudd and Aziz Ansari, but still didn’t reveal too much of the story. Like the red band trailer, there were instances of people being abducted by aliens and other forms of chaos. It looks like a combination of many different apocalyptic theories will take place. More of the cast is revealed in the trailer as well, which will really excite those awaiting this film.

A few notes before going into spoilers: When asked if there would be a Freaks and Geeks reunion, Rogen said there is nothing planned at the moment, but he would be more than happy to see it happen. This is the End has James Franco, Jason Segel, Martin Starr, and himself; so you have a few of the actors from Freaks teaming up again. Craig Robinson stars in Rapturepalooza and Tyler Perry’s Peeples, which will both release this year. And Danny McBride will be shooting the fourth season of Eastbound & Down this summer.

SPOILERS AHEAD REGARDING THE CLIPS! 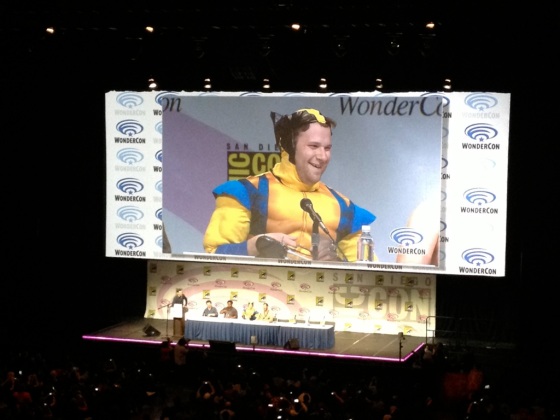 The first clip we were treated to was the death of Michael Cera. In the trailer it is revealed that he is a bit of an ass and a coke addict. As the apocalypse begins, the party at James Franco’s ends as the attendees flee his house. Outside, Hollywood is on fire. A strung out Michael Cera is complaining that he lost his phone and starts accusing everyone of stealing it. The ground begins to shake and then a light pole goes straight through Cera’s chest and he is lifted into the air. He reaches into his pocket and finds his phone and is embarrassed by the situation.

In the second clip, we find our protagonists trying to save their friend Jonah Hill from demonic possession; this is where I assume multiple apocalyptic theories will take place. Knowing what he has seen from The Exorcist, Jay uses a cross made out of kitchen utensils and yells, “The power of Christ compels you!” In a sarcastic tone and cynical manner, a demonic Jonah replies back with some amazing witty banter negating Jay’s efforts to try and save him.

I love both scenes and they only cement my anticipation for this film.