Topping off the weekend of April 19-21, 2013, Oblivion proved Tom Cruise has still got it, leaving the box office battlefield victorious. Box Office Aftermath is an ongoing column dedicated to recapping the weekend’s total ticket sales. Each week, combatants enter the cinematic war zone, bloodthirsty for your cash. But there can only be one true winner. In Box Office Aftermath, we will take a look at the numbers, how previous contenders fared, and provide a brief analysis of the results.

Tom Cruise channeled the power of Xenu and wiped the floor with the competition earning $37 million at the box office this weekend. The visual, sci-fi spectacle stole the show. And although Oblivion resembled many films of its genre, it would appear audiences were unaffected by the unoriginal “original” story. It may still have a bit of steam going into next weekend against Pain & Gain and The Big Wedding, but it will be close.

Jackie Robinson didn’t falter to far from its last weekend haul, dropping only 35.5 percent. 42 made well over its budget, taking in $17.7 million this weekend, bringing its total domestic gross to $53.7.

The Croods took third, still averaging a decent weekend gross for its fifth weekend in theaters. DreamWorks/Fox was able to snag another $9.23 million, taking The Croods up to $154.6 million domestically. I particularly found The Croods to be a fun family adventure, but it only ranks 13th out of all DreamWorks animated films. Kung Fu Panda 2 was only capable of earning $165.2 million, so The Croods should climb the ranks before it leaves theaters.

Scary Movie 5 toppled more than 56 percent down to fourth from second scraping a measly $6.15 in its second weekend.

Clutching on to fifth was G.I. Joe: Retaliation with $5.76 million, dropping 47 percent, but bringing its total domestic gross to $111 million in its fourth weekend.

This is the third weekend in a row that was not able to compare to the numbers in the previous weekend. The box office sales were down seven percent. G.I. Joe: Retaliation an and The Croods the weekend before had a decent surge in attendance. With a Katherine Heigl and De Niro movie along with The Rock and Marky Mark, we may see a triple team of hits above $10 million each this up coming weekend.

The Place Beyond the Pines, opened big since its influx of over 1,000 new theaters, grabbing hold of a cool $4.91 million. I would like to see if Focus Features will do another big push for more theaters this coming weekend.

Also opening alongside Oblivion this weekend was Rob Zombie’s The Lords of Salem. The hit or miss director backed by Anchor Bay was able to earn $642 thousand, but within 354 theaters. That’s not too bad, but nothing spectacular. Two smaller indies, Home Run and Filly Brown, also opened this weekend and snagged almost $1 million more each than Salem.

(Click the image below to enlarge the chart. All figures are domestic box office.) 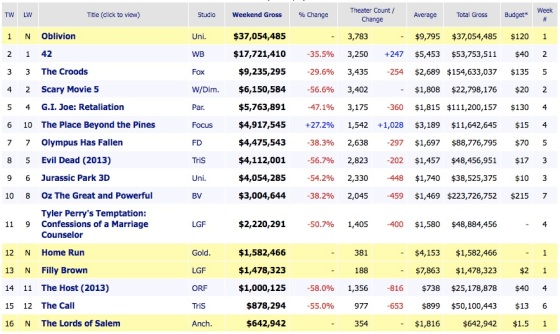