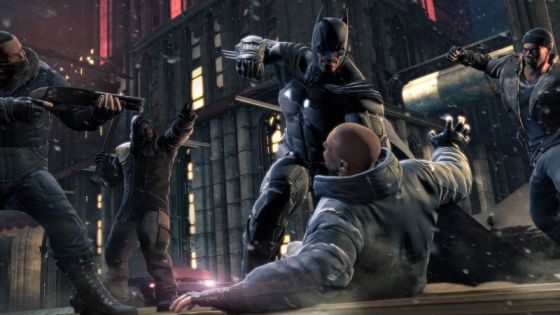 There have been a lot of questions leading up to the release of Batman: Arkham Origins, mostly pertaining to the gameplay since Rocksteady Games, the developer behind both Arkham Asylum and Arkham City, decided to take a bow out of the franchise and leave Warner Bros. Games Montreal in charge. At Comic-Con 2013, I got to get my first hands-on look at the prequel to one of the most acclaimed video game franchises of all time. See whether Origins is up to snuff on its predecessors after the jump.

After seeing the first trailers few trailers from come out of E3, and then the latest villain introduction, I felt that WB Games Montreal has got this. Clutching the controller on the SDCC convention floor, with zero worries in my mind, I engaged in the next installment of the Arkham series.

Thrown into a call to action scenario using Batman’s newest tool to intercept police calls, we hurry to a crime in progress. Gotham City is very massive and luckily the ability to grapple and propel yourself forward is still intact. Arriving at the scene, we see a few henchmen below while a police helicopter comes into play. That is until it gets shot down.

Using the upgraded Detective Mode, Batman is able to replay the helicopter’s crash in more detail to assess the situation and find the cause of the incident. This Detective Mode is very engaging and a great step up from Arkham City.

This demo was a huge, open world experience that WB Games Montreal put together. I didn’t want to explore everything due to lack of time, but I had the chance to encounter some of Origins new goons. They definitely feel a lot smarter and there are new characteristics that you’ll have to deal with that go beyond the traditional goons you’re use to in the past. The fighting system is just as fluid as before and instincts kick in quite fast once you settle in.

Once dispatching the goons, I entered a building lobby of sorts. This is where Batman gets to play around with another new toy, the Remote Claw. Here Batman is able to highlight one object and propel it to another. For instance, you can lock on to two goons and have them collide into each other or lock onto a goon and an exploding canister and knock him out. The Remote Claw is also handy for tying up enemies or making a tight rope to walk on.

The demo had ended, but not without encountering everyone’s favorite clown, the Joker. The voice actors are completely new for Batman and the Joker this time around. It isn’t as jarring as you think, Roger Craig Smith and Troy Baker do an adequate job fulfilling their characters admirably.

Fans of the Arkham series should have little to fear come this October. It’s exciting to think that we’ll be getting a whole new world to explore and brand new villains to thwart. If the game is as tight and well-rounded as this demo, there should be no problems for fans getting use to the idea of Warner Bros. Games Montreal taking the reins of this terrific franchise.

(Click on the thumbnails below to enlarge the gameplay images)

Batman: Arkham Origins releases this October 25 in US stores everywhere for the PlayStation3, Xbox 360, and PC

For more Comic-Con 2013 coverage, follow the SDCC tag or you can find TTRC on Facebook or Twtiter for updates as they are made available.