Rounding out the weekend of November 22-24, 2013, The Hunger Games: Catching Fire dominated over the competition, leaving the box office battlefield victorious. Box Office Aftermath is an ongoing column dedicated to recapping the weekend’s total ticket sales. Each week, combatants enter the cinematic war zone, bloodthirsty for your cash. But there can only be one true winner. In Box Office Aftermath, we will take a look at the numbers, how previous contenders fared, and provide a brief analysis of the results.

Like a raging inferno, the box office soared this weekend with the help of The Hunger Games: Catching Fire. Bringing the domestic box office up a whopping 83 percent this past weekend, the young adult sequel scored big with audiences and critics. Raking in $158.87 million, the Suzanne Collins adaptation broke the box office record as the biggest opening feature for November ever. Catching Fire is also the sixth-largest opening on record, and comes in third for all-time biggest opening for a 2D movie. Catching Fire also comes in right above The Hunger Games, which opened up with $152 million last year and a good amount ahead of the Twilight sequels that opened between $138-142 million. How do you like them apples?

Thor: The Dark World makes a stand in second despite falling 61 percent in retention. The Marvel Studios sequel earned $14.19 million at the box office in its third weekend, bringing its total domestic gross to $167 million; just shy of its $170 million budget. The Dark World is definitely prime for going above and beyond that this holiday season and could be the first Marvel Cinematic Universe film to cross over the $200 million domestic besides The Avengers or Iron Man films.

Making a case for one of the most unforeseen critically successful movies of the year, The Best Man Holiday keeps a strong hold in the top five in third. Taking in $12.49 million, the film took a big drop in its second weekend falling 58.5 percent.

Also opening up this weekend was the French-Canadian remake Delivery Man. Debuting in fourth, the Vince Vaughn dramedy didn’t fair too well, only grossing $7.94 million. The Internship, another Vaughn movie that opened up previously this year, debuted at $17.32 million with the help of Owen Wilson by his side. Delivery Man was all set on Vaughn’s shoulders unfortunately.

Capping off the top five is Free Birds with $. Being the only kid-friendly film this weekend, it’s not surprising that parents decided to stick with $5.36 million. The animated turkey of the year has only been able to gross $48 million so far and will most likely fall pretty hard next weekend when Walt Disney Studios releases Frozen.

Ender’s Game suffered a big drop in its theater count this weekend. With one big sci-fi, young adult film coming in, one must go out. Losing 1,200 theaters, Ender’s Game grossed only $1.97 million, taking its total domestic gross to $57.19 million. Just a little shy of its $110 million budget I would say. I would find it hard pressed to see the potential for a sequel.

(Click the image below to enlarge the chart. All figures are domestic box office.) 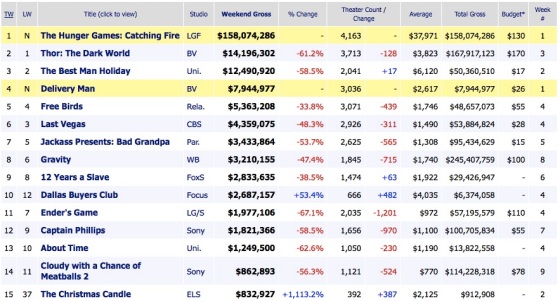