All week at Comic Con, Marvel Studios has been slowly releasing individual concept art character posters for their little upcoming feature film, Avengers: Age of Ultron. With their upcoming Hall H panel later today, Marvel has released the final two posters, which combined form a very awesome poster. Check out each individual poster and the complete version after the break.

With Avengers: Age of Ultron is set to release at the beginning of the summer movie season, you better believe that it pandemonium struck convention room floor as fans were eagerly awaited to get their hands on these posters. It was like put sheep out to the slaughter. When it comes to exclusives or meeting the actors, Marvel fans could almost put Bieber fans to shame.

Look at all those hands reaching for those pieces of paper. It’s like The Walking Dead out there. Fighting a swarm of Ultron bots, Captain America, Iron Man, Thor, Black Widow, The Incredible Hulk, and Hawkeye are all featured below as well as Quicksilver, Scarlet Witch, and Vision, it can be expected that this movie is sure to be a smash hit for Marvel.

(Click on the images below to enlarge any individual poster) 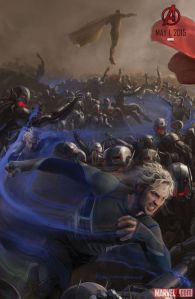 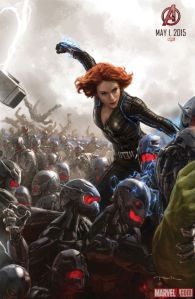 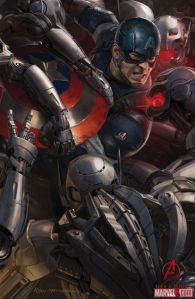 And when you put them all together, you get this amazing combined poster below:

Here is the unofficial plot synopsis for Avengers: Age of Ultron, courtesy of EW:

For better or worse (trust us, it’s worse), his Tony Stark has devised a plan that won’t require him to put on the Iron Man suit anymore, and should allow Captain America, Thor, Black Widow, Hawkeye, and the Hulk to get some much needed R&R as well. His solution is Ultron, self-aware, self-teaching, artificial intelligence designed to help assess threats, and direct Stark’s Iron Legion of drones to battle evildoers instead.

The only problem? Ultron (played by James Spader through performance-capture technology) lacks the human touch, and his superior intellect quickly determines that life on Earth would go a lot smoother if he just got rid of Public Enemy No. 1: Human beings. “Ultron sees the big picture and he goes, ‘Okay, we need radical change, which will be violent and appalling, in order to make everything better’; he’s not just going ‘Muhaha, soon I’ll rule!’” Whedon says, rubbing his hands together.