Have we reached a superhero movie plateau? That’s a question I’ve been struggling over since I left Avengers: Age of Ultron with deeply polarizing thoughts on the film. Writer-director Joss Whedon has spent an impressive amount of time shaping the events of the Marvel Cinematic Universe to culminate to this very moment that I would consider to be the biggest nerdgasm cinema has ever achieved thus far. It’s a spectacular ballet of many moving parts. And as breathtaking as the movie may be, Age of Ultron definitely has the feeling that this marvelous house of cards producer Kevin Feige has built could come crashing down at any second. END_OF_DOCUMENT_TOKEN_TO_BE_REPLACED

In just a little over four hours, fans were able to unlock the third Avengers: Age of Ultron trailer this morning, which was originally suppose to release on Thursday this week. This second, full-length trailer provides audiences with more back story on Ultron and how his dubious plot affects our heroes. As one of the greatest big bads in the Marvel Universe, this trailer certainly sets up the movie to live up to expectations. Check out the trailer after the break. END_OF_DOCUMENT_TOKEN_TO_BE_REPLACED

In just a little over four hours, fans were able to unlock the third Avengers: Age of Ultron trailer this morning. It was originally suppose to release on Thursday this week. This full-length trailer provides audiences with more back story on Ultron and how his dubious plot affects our heroes. As one of the greatest big bads in the Marvel Universe, this trailer certainly sets up the movie to live up to expectations.

We’ve seen tons of Avenger-y action between the Hulk and Iron Man, well pretty much everyone versus Tony Stark really. However, we haven’t been privy to much about Age of Ultron‘s plot. As a comic book reader, and Avengers: Earth’s Mightiest Heroes enthusiast, I am fully aware of what Ultron is capable of. This trailer sums up the intense conflict fairly well and provides just enough not to get into too many spoilers.

And as an added bonus, we finally get to see more of the twins, Quicksilver and Scarlet Witch, in action. We haven’t seen much of their involvement other than a few quick shots. In the trailer it looks like they’ll be involved with Ultron helping him in some manner before they realize their own stupidity and join up with Cap and the other heroes.

It’s a pretty awesome trailer all around, giving also our first glimpse of Vision at the tail end. Still, there is no clues as to how he comes into existence or how he’s involved amongst the chaos. However, I am comfortable with leaving everything as is and going into the film with just this information. I’m ready. My body is ready. Bring it on.

[Click on any thumbnail below to begin the image gallery]

Here is the official plot synopsis:

When Tony Stark tries to jumpstart a dormant peacekeeping program, things go awry and Earth’s Mightiest Heroes, including Iron Man, Captain America, Thor, The Incredible Hulk, Black Widow and Hawkeye, are put to the ultimate test as the fate of the planet hangs in the balance. As the villainous Ultron emerges, it is up to The Avengers to stop him from enacting his terrible plans, and soon uneasy alliances and unexpected action pave the way for an epic and unique global adventure.

While sports fans were watching one of the most historical college football games of our generation, during the big show a new trailer for a little movie entitled Avengers: Age of Ultron was released. The stakes have never been higher as the fate of humanity befalls upon our heroes yet again, but only this time it may be their fault. The Marvel Cinematic Universe is headed in a much darker direction. Join us after the break to watch the trailer. END_OF_DOCUMENT_TOKEN_TO_BE_REPLACED

It’s been only a week since the first trailer for Avengers: Age of Ultron released, but Marvel and Disney want to spice up the pot with an extended look at the film. In it we find our heroes testing their might to prove who is worthy enough to pick up Mjolnir aka a superhero d*ck measuring contest. But there is an unwelcome guest that sees their efforts futile. Watch the clip after the break. END_OF_DOCUMENT_TOKEN_TO_BE_REPLACED

In lieu of the recent leaked teaser for Avengers: Age of Ultron earlier today, Marvel has released the official trailer in beautiful hi-definition early. The trailer was originally suppose to air during next week’s episode of Agents of S.H.I.E.L.D. After the jump, check out the first footage of one of the most anticipated films of 2015 along with over 100 hi-res screencaps. END_OF_DOCUMENT_TOKEN_TO_BE_REPLACED

Avengers: Age of Ultron is undoubtedly the most anticipated film of 2015 for many people. And with the first teaser set to release next week during Marvel’s Agent’s of S.H.I.E.L.D., some folks couldn’t wait that long and had to show it to the world. Although I can’t present the trailer, I can offer you an abundant of screenshots that feature Ultron, Quicksilver, Scarlet Witch, Iron Man’s Hulkbuster armor, and more; as well as a trailer description. Check them out after the break.

[UPDATE: The official trailer has gone live and we have it here along with many hi-res screenshots]

END_OF_DOCUMENT_TOKEN_TO_BE_REPLACED

With Guardians of the Galaxy making box office magic, that only means one thing: the next Marvel Studios release will be Avengers: Age of Ultron; and it’s done filming! Joss Whedon made the official statement today on the Twitter, where he thanks his cast and crew for their tireless efforts. Check out what Whedon had to say after the break. END_OF_DOCUMENT_TOKEN_TO_BE_REPLACED

For the masses who were not able to get into Hall H, and for the millions who weren’t able to attend Comic-Con, you’re in luck. Marvel Studios has just released this awesome recap of Phase 1 and 2 of their cinematic universe, which was shown during their panel. Not only does this retrospective cover up to where we are now, but it gives our first glimpse of Josh Brolin as Thanos, the big bad of Phase 3. END_OF_DOCUMENT_TOKEN_TO_BE_REPLACED 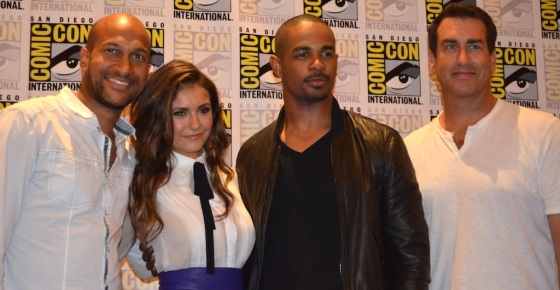 Suffice it to say that Comic-Con has turned into a long weekend for celebrities to invade San Diego. Among the lines and the chaos, you might find some Hollywood types shmoozing and boozing between panels. But if you are not able to attend fancy invite-only parties, the best chance anyone has to run into a celeb is by catching them on the showroom floor, become a member of the press, or by lucky happenstance. Check out who we bumped elbows with over the weekend, you might recognize a few. END_OF_DOCUMENT_TOKEN_TO_BE_REPLACED