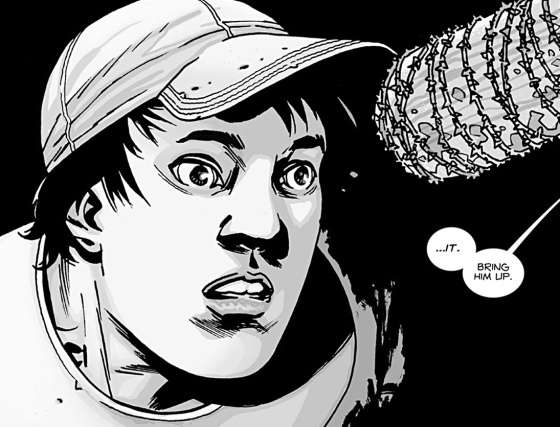 Two years ago was a monumental moment for The Walking Dead as Robert Kirkman reached his 100th issue. And with that 100th issue came one of the most gruesome deaths in series history. We are talking about the mutilation of Glenn’s head by way of barbed-wire bat. However, the man in the trailer with the metal baseball bat is not the villain, Negan, who does him in. This is some lackey who is part of the group holding Rick and pals in a train compartment as food storage.

Will they end Glenn’s life earlier than what his lifespan in the comics gave him? In this trailer we don’t see Glenn at all after we see the bat except one scene where he is free from captivity with Maggie, Rick, and Michonne. So that makes me suspect he is freed, but perhaps the bat is a tease, and maybe he dies later because he is nowhere to be seen anywhere else in the trailer.

And what about Beth? We find out she is alive because she is in the trailer for half a second, but where has she been? It looks like she works a hospital now in those scrubs she’s wearing. Maybe she found safety with a new group and figured Daryl bit the dust?

There are many exciting questions I’m looking forward to see the answers to this season. Season 5 looks like it will be one of the best because when The Walking Dead works with adrenaline pumping moments that challenge our survivors, that’s when I think the show is at its best. We can forget the farm and season 2 even existed.