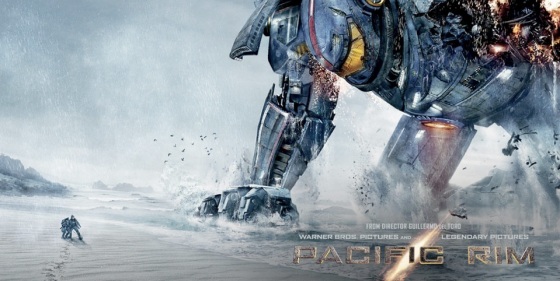 If transforming automatons, fighting a never ending battle of good versus evil is not satisfying enough, than how about director Guillermo del Toro’s Pacific Rim, a tale of skyscraper sized aliens and robots. In this original sci-fi, action–adventure flick, humanity has reached its last stand when threatening creatures do not come from the stars, they arise from our oceans. Check out the first full trailer for Pacific Rim after the jump.

I hadn’t heard much about Pacific Rim until Comic-Con this past summer. Viral marketing has slowly introduced itself, which led to this spectacle of a trailer. From what I saw on the showroom floor, the robot design and the scale looked massive. As you can tell by the image below, massive, may be a bit understated.

I dig this trailer. It’s epic, the way they deliver the story elements is intriguing, and it feels like a big budget indie picture since there is no-one remotely famous in sight, other than Idris Elba. The downside of the trailer is the stereotypical BBBHHHRRRMMM music coined by Hans Zimmer after the Inception trailer let loose. Watch for yourself and discover how humanity will endure:

A lot of what we see in the Pacific Rim trailer may bring up a lot of comparisons between Evangelion or a few other anime series. There’s the rookie pilot, the hardened war sergeant, and the veteran warrior who is having issues of internal conflict. The premise alone could suggest many homages to anime as well. Read the official plot synopsis via Apple Trailers:

When legions of monstrous creatures, known as Kaiju, started rising from the sea, a war began that would take millions of lives and consume humanity’s resources for years on end. To combat the giant Kaiju, a special type of weapon was devised: massive robots, called Jaegers, which are controlled simultaneously by two pilots whose minds are locked in a neural bridge. But even the Jaegers are proving nearly defenseless in the face of the relentless Kaiju. On the verge of defeat, the forces defending mankind have no choice but to turn to two unlikely heroes–a washed up former pilot (Charlie Hunnam) and an untested trainee (Rinko Kikuchi)–who are teamed to drive a legendary but seemingly obsolete Jaeger from the past. Together, they stand as mankind’s last hope against the mounting apocalypse.

Again, I hope these no-name actors can deliver a performance as big as what Pacific Rim promises to show us. Idris Elba can always find a way to bring something fun to his roles, but Charlie Day seems a bit out of place. Day will probably be the Ariadne from Inception of the film because his voice always sounds like he is asking a question.

There are a few questions that come to mind when viewing this trailer. What was the time length between the first Kaiju attack and the second? How has the world been affected? What did it take to bring down the first Kaiju if there were no Jaegers? How long did it take to make the first Jaeger? If the enemy was smart, why didn’t they send more than one Kaiju, and is there an enemy that we’ll see who controls the Kaiju? Hopefully all of these questions and more will be explained; we wouldn’t want del Toro pulling a Lindelof. 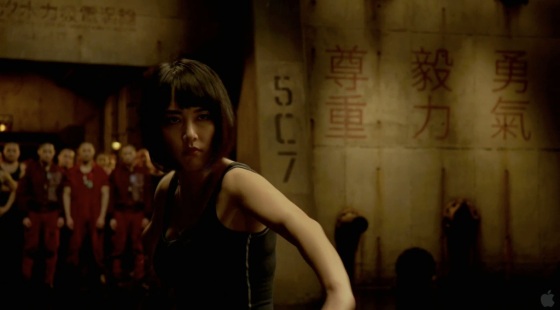 Guillermo del Toro has also been known for his fantastic eye for creature and set design. His work on Pan’s Labyrinth and the Hellboy series proves he has a knack for creating worlds that go above and beyond our expectations. If you look at any J.J. Abrams film, a lot of his creatures look similar – something audiences cannot find in del Toro’s filmography.

If you would like to see the Pacific Rim trailer with director commentary, head on over to MTV Movies for more fun little tidbits about the trailer.