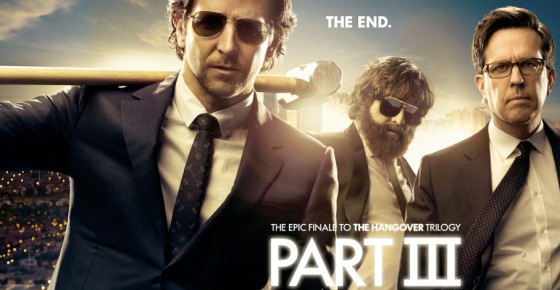 If the movie trailers and the posters live up to their promise, this is the end for The Wolfpack as we know it. Director Todd Phillips has proclaimed The Hangover Part III as the epic finale of one of the most polarizing franchises of all time. Not disliking Part II myself, as much as everyone else, I still held reservations against Part III. Going in with low expectations, I can say that The Hangover Part III makes up for the disastrous Part II, but comes nowhere near the level of the original.

Breaking formula, there is no hangover this time, but there is another missing person. Alan (Zach Galifianakis), Phil (Bradley Cooper), Stu (Ed Helms), and Doug (Justin Bartha) are reunited once again to mourn the loss of Alan’s dad (Jeffery Tambor). Alan’s outrageous antics and almost cartoonish behavior have elevated to the point that his friends and family make the executive decision to banish him to a special home until he is deemed fit to reenter society.

Before The Wolfpack can even make it to Arizona with Alan they are ambushed by Marshall, a drug kingpin who has direct connections to “Black” Doug (Mike Epps) from The Hangover. Six degrees of separation brings Marshall to reveal that Leslie Chow (Ken Jeong) has stolen $21 million from him. Marshall kidnaps “White” Doug and forces Phil, Stu, and Alan on a merry chase to find Mr. Chow and his money.

The tone is set in a much darker place. A real life is in serious peril with Marshall threatening to kill Doug unless they bring him Chow. This plot development is a fantastic way to tie all three movies together, but it rarely finds a way to works itself in with the subplot of Alan needing mental help. Drifting away from the trouble with Alan to focus on finding Chow, there is never a feeling of urgency to anything that makes us care for Doug’s safety, which ultimately lessens Alan’s story.

As Part III begins as a cry for help from Alan, we never see a progression of his change until the very end when he meets Melissa McCarthy. Her scene with Alan makes more sense as a gag than an actual instrument to influence the character. This moment is way too forced and is resolved too quickly. However, it is nice to see Phil and Stu bring a calm balance to the overly exhausted random acts of words that spew out of Alan’s mouth. These actors have a great chemistry together, but nothing in this story helps grow these characters from what we know of them already.

On the other hand, Mr. Chow is a greater force to be reckoned with this time around and you can actually tell how threatening and sly he can be. And although Jeong works well in Part III, his atrocious accent and Asian caricature is still unbearable. John Goodman is a decent commanding villain, but is never given much to do. What irritates me about his threat is that since they are in the U.S. The Wolfpack never bother to call the cops or are given an ultimatum by Marshall, which lacks tension.

For a sequel that no one really asked for, Part III does a reasonable job at clinging on to audiences that have not lost faith in the franchise. Unfortunately it was an uphill battle from the beginning after Part II left its mark. You could, however, skip Part II and hardly miss a beat aside from one joke. Almost every element of the first film is re-introduced in the third to bring the trilogy together in a neat little package. Even little Carlos makes an appearance, and it happens to be the most genuine scene in the movie.

The movie is visually slick, like any under Todd Phillips’ belt, he uses every ounce of his budget to his advantage. With what comedy there is, the timing from every actor is just as smooth as ever. Again, Phillips makes use of a killer soundtrack and fits it well into each scene. There is a rendition of “Hurt” from Nine Inch Nails that would make the band cringe, but it is timed perfectly for this film. “Dark Fantasy” by Kanye West, “Down in Mexico” by The Coasters, and many others work in favor of the film keeping up a high energy.

Helms, Galifianakis, and Cooper have gotten their character dynamics as The Wolfpack down to a science. As much as it hurts to see these actors fill the shoes of these characters again – because it feels like they’re in it for the paycheck – they all do a great job running through the motions. I did have a good chuckle here and there, but most of those moments have been easily forgotten. There are some clever elements that I enjoyed, but for the most part this movie is bland and fails to elevate the franchise one inch.

And even though the stakes are much higher this time, it never really appears like anyone cares about the safety of Doug and his kidnapping is one more annoyance they have to suffer through to find a happy ending. Doug’s kidnapping is basically used as a running gag at this point to keep him out of the film. What I would have liked to see is for Todd Phillips to completely depart from this franchise, maintain the same rules, and try something daring to give us something fresh for these characters to do.

Fans of The Hangover won’t be entirely disappointed by Part III as much as they were with Part II. By no means does it reach the same caliber of the first, but it is coherent enough to work as an subpar sequel. At no point does Part III feel like an enjoyable farewell experience, and that’s a shame. The actors make this film entertaining enough to get by, but The Hangover Part III never succeeds in being anything more than a way to cleanly tie up loose ends.

Did you see The Hangover Part III? Tell us what you thought of the film in the comments section below.

The Hangover Part III was directed by Todd Phillips, running at 100 minutes long. This film is rated R for pervasive language including sexual references, some violence and drug content, and brief graphic nudity.