In Blumhouse Productions’ upcoming low-budget horror film, Unfriended finds a group of teens literally cyber-attacked by an unknown entity seeking revenge for something they may or may not have posted online. With many of today’s first world problems and humble brags, some believe that there could not be anything more terrifying than to lose your privacy to the Internet. Following their WonderCon panel this weekend, I had the opportunity to sit down with the cast of Unfriended to discuss what they fear about social media and online culture.

Shelley Hennig (Teen Wolf; Ouija, Days of Our Lives) was quick to respond to my inquiry, revealing a fairly dark situation she had personally encountered.

“But I mean, at that you have to laugh,” she adds.

You have to be fairly strong-willed to laugh at a situation like that.

Newcomer Moses Jacob Storm felt simply that there is way too much information on the Internet.

Screenwriter Nelson Greaves joined in on the conversation, somewhat delving into the inspiration to his story.

“In fact anything you do on the Internet lasts forever. Whether you’re Snapchatting inappropriate pictures of yourself or if you’re posting a message about someone else. Even if you delete it, nothing’s actually ever deleted. Everything lives forever. And everything you do, you better be ready to face for the rest of your life.” 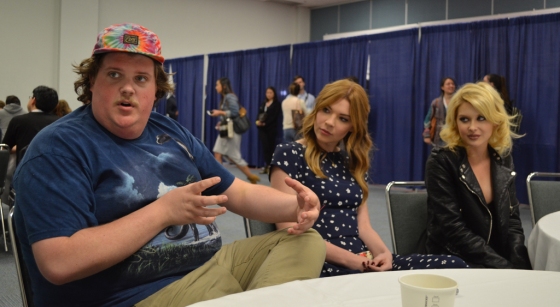 Throwing it back to the cast, Jacob Wysocki (Pitch Perfect; ABC Family’s Huge) tends to agree with Nelson about the attitude people have toward what they post on the Internet.

“I think so many people believe that they create a face of anonymity of what they’re putting out there and I can say anything and there’s no real repercussions because you can’t reach through this screen.”

Unfortunately for his character in the film, that’s not the case.

And finally, Courtney Halverson (Keith; HBO’s True Detective) feels there are too many bad vibes that get tossed around on the world wide web.

“I think there’s so much negativity on the Internet to begin with. And even the stuff that’s positive I feel like many of my friends are like, ‘oh my life is so boring.’ Its like we all post the highlights of our lives and we tend to critique the worst parts of other people. I think that it breeds negativity. And that’s something we are all familiar with.”

Ushering in a new era of horror, Universal Pictures’ Unfriended unfolds over a teenager’s computer screen as she and her friends are stalked by an unseen figure who seeks vengeance for a shaming video that led a vicious bully to kill herself a year earlier.