Clear your schedule for February 16, 2018 because the first trailer for ‘Black Panther’ is here and proves the movie will take priority over anything else you had planned. END_OF_DOCUMENT_TOKEN_TO_BE_REPLACED

The long-awaited first teaser trailer for Star Wars: The Last Jedi has arrived and ready for mass consumption. END_OF_DOCUMENT_TOKEN_TO_BE_REPLACED

I’ll give you a second to clean yourself off after watching the new Star Wars: The Force Awakens trailer a few dozen times. Thankfully, after it’s premiere during the San Francisco Giants vs. Philadelphia Eagles game during Monday Night Football, the trailer arrived online in beautiful HD before any rebel scum could leak a lesser quality version.

Who are you? What are you fighting for? Is following in the footsteps of a Sith Lord whom I’ve never met a solid life plan? Star Wars: The Force Awakens is asking the big existential questions. While the original Star Wars trilogy told a tale of good versus evil, and the prequel trilogy a more politically driven love story, it would appear that our heroes in the start of this new chapter of the most epic space opera are seeking purpose in a galaxy thrown into chaos.

This new Star Wars: The Force Awakens trailer doesn’t give away many details about the plot, but rather the film sells itself on the direction of its main characters. Rey (Daisy Ridley) and Finn (John Boyega) come across as folks who have lost their way, seeking something greater than themselves. And it seems as though they’ll find what they’re looking for after they meet an aged Han Solo (Harrison Ford).

I’m loving the shades of depth emitted from our protagonists, the aerial battle sequences look phenomenal, and the sweeping score by John Williams is immensely emotional, but somehow I remain cautiously optimistic. I think this trailer does everything right to bring Star Wars back into the good graces of every fanboy and girl who was burned by the prequels, I just can’t put my guard down quite yet.

We’re led to believe that Kylo Ren (Adam Driver) is hoping to carry out Darth Vader’s wishes, but something tells me the editing in the trailer is misleading and he may be talking to someone else – not the extra crispy helmet of the once great Sith Lord. We also have no idea where Luke Skywalker (Mark Hamill) is in all of this. And then there’s a ton of cast members who have yet to be revealed, such as Domhnall Gleeson or Andy Serkis.

The pace at which they are rolling out details is fantastic. The less the better, but just enough to appease my interest. I’ve already bought my ticket for a true IMAX 3D experience, which went on sale earlier today. Now all that’s left is the waiting game.

What’s interesting about the promotion of this trailer leading up to its release is that the teasers had footage not shown in the final cut. In the first teaser below there is a stoic shot of Oscar Isaac’s Poe and in the second is Daisy Ridley’s Rey looking up at fighters flying across the sky.

The First Order is coming. Tune in to Monday Night Football on @ESPN for a new look at #TheForceAwakens.https://t.co/BbPQZ1cjBo

Here’s the official theatrical movie poster that released yesterday with the teasers (click on the image to enlarge):

That’s no moon. Would The First Order really attempt a third time to make a planet killer after two failed goes at it? Perhaps J.J. Abrams is obsessed with spacecrafts that can blow up planets? Maybe The Rebel Alliance built this one and are giving The First Order a taste of their own medicine? Where’s Luke in the poster? What’s that little creature standing in between R2-D2 and BB-8? Is it symbolic that Kylo Ren and Rey’s weapons mirror each other? Are they brother and sister?

(Click on any thumbnail below to begin the image gallery)

It’s Star Wars Day! And in celebration, Vanity Fair snagged an exclusive first look at the upcoming J.J. Abrams joint, a little film called Star Wars Episode VII: The Force Awakens. The contemporary, pop culture and fashion mag brought portrait photographer Annie Leibovitz to shoot on location for a behind-the-scenes look at one of the most anticipated movies of the year. Leibovitz is no stranger to capturing iconic moments as she recently shot the Kanye West-Kim Kardashsian wedding dress cover for Vogue. Not only has VF pulled back the elusive SW curtain, but they have also confirmed a few character speculations many Bothans have been dying to know the answer to.

Thanks to this video, we are treated to our first look at Adam Driver on the set of The Force Awakens, who plays a Sith Lord by the name of Kylo Ren. What’s interesting about this incredible reveal is that it shows him in character without the mask, something the trailers have yet to include.

The photo shoot also brings us a closer look at Daisy Ridley in character as Rey who can be seen atop her speeder. (I got a chance to see the speeder in person at Star Wars Celebration last month.) There are also moments inside the Millennium Falcon’s cockpit with Ridley, as well as Harrison Ford (Han Solo), Peter Mayhew (Chewbacca), and John Boyega (Finn).

(Click on any image below to begin the gallery)

Now while those pointing fingers at Driver to be the man behind the mask can rest at ease knowing they were right, we’ve not had any clue as to who Oscar winner Lupito Nyong’o would be playing. From the Vanity Fair article published today, we learn that Lupita has donned a mo-cap suit to embody her CGI rendered character, Maz Katana, a space pirate whose good fortune allow her to own a castle with many colorful guests, which you can see below.

Another huge confirmation in this month’s issue is that Gwendoline Christie is in fact the chrome Stormtrooper who goes by the name of Captain Phasma. She is a leader amongst The First Order, the remnants of the Galactic Empire. And on the other side of the coin, the Rebel Alliance is now known as The Resistance – maybe they’ll sing “Do You Hear the Ewoks Sing”? One can assume that Poe Dameron, played by Oscar Isaac, will be one of the top pilots of the Resistance.

(Click on any image below to begin the gallery)

And on a hilarious note to end on, Abrams teased fans that he’d thought about killing the infamous Jar Jar Binks,

“I have a thought about putting Jar Jar Binks’s bones in the desert there. I’m serious! Only three people will notice, but they’ll love it.”

There are still many secrets to be uncovered, which we hope to see as we draw closer to the end of the year.

May the Fourth be with you! This issue of Vanity Fair hits newsstands on May 12, the digital edition will be out May 7.

Can you even imagine if this was the first teaser they released back in November? I can’t even believe it’s been that long since we’ve seen footage and nothing has leaked aside from those character posters of Sith Lord Kylo Ren yesterday. This trailer has all new footage, not a single shot was repeated from the first one, and it’s even mixed with John William’s original score from Episode IV: A New Hope.

We have ourselves here a new looks at Daisy Ridley as Rey, John Boyega as Finn, and Oscar Isaac as Poe Dameron. And of course, we cannot forget the iconic shot of Chewbacca (Peter Mayhew) and Han Solo (Harrison Ford) together again; and boy does it feel good. There is also an ominous shot of what appears to be Luke Skywalker (Mark Hamill) and his mechanical hand with R2-D2. Hamill can also be heard, in narration only, reciting a similar monologue from Episode VI: Return of the Jedi to an unknown person that he believes also has the powers of the Force. Who could it be?

Other questions we must inquire about: who is running the Empire now? Why didn’t they show any footage of Leia? And who’s that silver Stormtrooper?

This is what dreams are made of here people. Hopefully everyone’s excitement won’t be built up only to be let down if the movie doesn’t live up to our expectations.

So much for the select theater gimmick, the first teaser trailer for Star Wars Episode VII: The Force Awakens is now online! Get ready to awake from your tryptophan stupor because this teaser will rock your world. And the best part, there is only one lens flares! Get your first look at J.J. Abrams‘ Star Wars after the break. END_OF_DOCUMENT_TOKEN_TO_BE_REPLACED

Star Wars fans lucky enough to live near one of thirty select theaters in North America this weekend will be getting an early look at Star Wars Episode VII: The Force Awakens. This teaser trailer was confirmed by Disney and director J.J. Abrams himself, who revealed the theater locations and length of the teaser trailer. Check out if you’re theater has been chosen after the break. END_OF_DOCUMENT_TOKEN_TO_BE_REPLACED 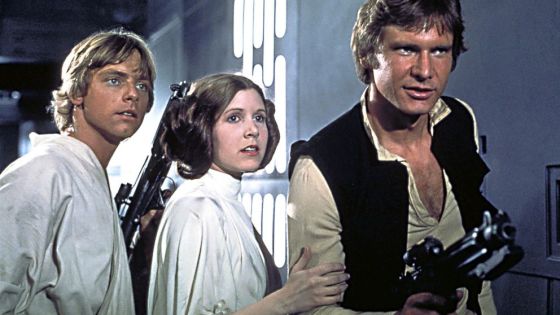 It was confirmed today that Academy Award winner Lupita Nyong’o, and Game of Thrones superstar Gwendoline Christie have been cast in J.J. Abrams’ upcoming Star Wars: Episode VII. This news broke earlier today, leaving all of the haters who were upset that only one female role revealed when the casting was originally revealed. Check out the official statement after the break.  END_OF_DOCUMENT_TOKEN_TO_BE_REPLACED