Something horrible this way comes, again. Nick (Jason Bateman), Kurt (Jason Sudeikis), and Dale (Charlie Day) are back for Horrible Bosses 2. Joining in on the fun once more is Jennifer Aniston, reprising her role as Dr. Harris whom is letting her freak flag fly once more. And by freak flag we mean she wants you to poop on her. Watch the trailer after the jump. END_OF_DOCUMENT_TOKEN_TO_BE_REPLACED

No director is perfect. Steven Spielberg, Quentin Tarantino, Tim Burton, and Martin Scorsese have had their bad days. But when I look at The Amazing Spider-Man 2, I am befuddled by the idea that Marc Webb is the man who directed one of my favorite movies of all time, (500) Days of Summer. Plugging in too many wacky, unconvincing villains while juggling many big ideas with little-to-no payoff, The Amazing Spider-Man 2 can sadly be put on the same playing level as Joel Schumacher’s Batman films. END_OF_DOCUMENT_TOKEN_TO_BE_REPLACED

Sony Pictures is proud to release the final trailer for The Amazing Spider-Man 2. Directed by Marc Webb, we revisit the wall-crawler played by Andrew Garfield, who must juggle his life between Gwen Stacy (Emma Stone) and being Spider-Man. Watch the full trailer after the break and see what you can come to expect when The Amazing Spider-Man 2 arrives in theaters on May 2.  END_OF_DOCUMENT_TOKEN_TO_BE_REPLACED

It’s a hard knock life for us as Columbia Pictures released the first trailer for the remake of the 1982 classic Annie. Director Will Gluck (Friends with Benefits; Easy A) bring this reboot to life, staring Cameron Diaz as Miss Hannigan, Jamie Foxx as Benjamin Stacks aka Daddy Warbucks, and Quvenzhané Wallis (Beasts of the Southern Wild) as little orphan Annie. Just in time for the holiday season, Annie will sing and dance her way onto the big screen on December 19 and you can watch the first trailer after the jump. END_OF_DOCUMENT_TOKEN_TO_BE_REPLACED 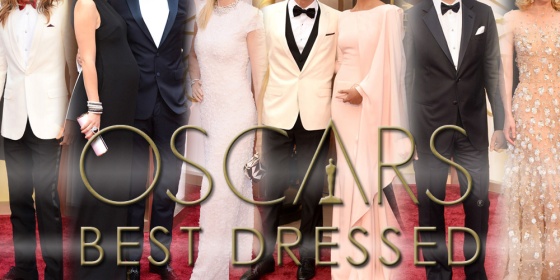 Last night’s 86th Annual Academy Awards, held inside the Dolby Theater in Hollywood, brought together the biggest names in cinema for the glitziest night of the year. While the excitement inside was placed on who would win Ocsar gold, all eyes were focused on the stars dressed to the nines on the red carpet prior to the big show. We saw many trends and beautiful ensembles this year, but there were a few that truly stood out. After the jump, check out the 10 Best Dressed Men and Women of the Oscars last night. END_OF_DOCUMENT_TOKEN_TO_BE_REPLACED

Everyone’s favorite web-slinger is back for his next adventure as Sony Pictures debuts the first trailer for The Amazing Spider-Man 2. This past Comic-Con, fans got their first look at Electro, the big bad Spidey has to face while searching for the truth behind the death of his parents. Those looking for a tastier look into TASM2 will get more than they bargained for as Sony and Marc Webb hold nothing back. See for yourself after the jump. END_OF_DOCUMENT_TOKEN_TO_BE_REPLACED

With a very bleak year for films, Todd Phillips’ Due Date seems to be the movie to help bring some life back into the end of the year. Apple has just released the second trailer for Due Date and this film looks to be in the same style as The Hangover with an obvious resemblance to Planes, Trains, and Automobiles. Robert Downey Jr. must make it home in time for the birth of his son as adventure ensues with Zach Galifianakis on a road trip adventure across the country.

Due Date will be released on November 5, directed by Todd Phillips (The Hangover and Old School), and also stars Jamie Foxx, Danny McBride, and Michelle Monaghan. Although, Galifianakis’ character seems too familiar to Alan from The Hangover, he does play the typecast well and hopefully he won’t get as overplayed as Michael Cera.

Zach Galifianakis and Robert Downey Jr. are a pair most unlikely to be in a movie together, but that is what will make this film so great. I think these two will have great on screen chemistry and make this a memorable film.

Check out the trailer after the break!

END_OF_DOCUMENT_TOKEN_TO_BE_REPLACED

Valentine’s Day, this little rom-com features the crème de la crème of actors such as Bradley Cooper, Jessica Alba, Jennifer Garner, Anne Hathaway, Ashton Kutcher, Julia Roberts, Jessica Biel, Topher Grace, Queen Latifah, George Lopez and Jamie Foxx. From director Garry Marshall (Pretty Woman), this looks like it could be pretty funny and shows the trials and tribulations of love and loathing of the good old V-Day. Take a look at the first teaser trailer below………