Brace your bank accounts, it’s time to see what’s Now Available to Own for the week of June 23, 2015. Every Tuesday we run down new movie, television, and video game releases that you can enjoy in the comfort of your own home, as well as some slick deals that can save you some coin. New on shelves this week are Batman: Arkham Knight, Workaholics (Season 5), Song One, and more.

The Forger (Philip Martin) Rated R [92 min] – A thief works with his father and son to forge a painting by Monet and steal the original. Together, they plan the heist of their lives. Starring John Travolta, Christopher Plummer, and Tye Sheridan

If ever there was a movie where a once famous actor showed signs of wear it would have to be The Forger. Not only does Travolta look tired, but so does his hairpiece. The Forger is wrought with too many subplots that don’t earn their keep and there is very little substance to grab hold of to keep you invested in the characters. SKIP IT!

Releasing Blu-rays on a limited release must be a new practice because Song One is now available via wide release. The movie lacks depth that the actors, who all do a fairly stand up job, can’t compensate for. There’s little imagination in the film’s storytelling that keeps you one step ahead at all times. WAIT FOR IT ON NETFLIX!

’71 (Yann Demange) [DVD Only] Rated R [99 min] – A young and disoriented British soldier is accidentally abandoned by his unit following a riot on the deadly streets of Belfast in 1971.Starring Jack O’Connell, Sam Reid, and Sean Harris

Unfortunately I did not have the chance to catch this film, but I’ve heard it was OK and Jack O’Connell puts in a good performance.

I’m partially through the fifth season of Workaholics and still enjoy the wacky hijinks these three delinquents get themselves into. However, I wish that the creators would break away from the formula or at least change things up to give Adam, Blake, and Anders a little more drive or purpose to bring a little more depth. Other than that, this show continues to be hilarious and pretty witty. BUY IT IF YOU LIKE THIS SERIES! OTHERWISE WAIT FOR IT ON NETFLIX!

Batman: Arkham Knight [Rocksteady Studios] (Warner Bros. Games Interactive) [Available for PlayStation 4, Xbox One, and PC] In the explosive finale to the Arkham series, Batman faces the ultimate threat against the city he is sworn to protect. The Scarecrow returns to unite an impressive roster of super villains, including Penguin, Two-Face and Harley Quinn, to destroy The Dark Knight forever. Batman: Arkham Knight introduces Rocksteady’s uniquely designed version of the Batmobile, which is drivable for the first time in the franchise. The addition of this legendary vehicle, combined with the acclaimed gameplay of the Batman Arkham series, offers gamers the ultimate and complete Batman experience as they tear through the streets and soar across the skyline of the entirety of Gotham City. Be The Batman.

I am picking up my copy tomorrow. I’m very excited about it. Ever since I saw some gameplay that debuted at Comic-Con last year with the Batmobile I knew this would revolutionize the franchise. Sadly, this is the final installment in Rocksteady’s Arkham series, but I’m sure Warner Bros. Interactive won’t let something this big go. From review headlines, it seems as though this is another strong title for the Batman, but the game is a bit too dependent on utilizing its new toys and the Batmobile. I look forward to whatever this next adventure brings me.

While we provide you with a list of available new releases Now Available to Own every Tuesday, Coming Soon to Blu-ray and DVD looks at all of the recent home video announcements. For the week of April 11, 2015 we have Kingsman: The Secret Service, American Sniper, Star Wars: Complete Digital HD Collection, Adventure Time, and more. Find out when they’ll be out and what special features movie fans can expect from them after the break. END_OF_DOCUMENT_TOKEN_TO_BE_REPLACED

Prepare your bank accounts, it’s time to see what’s Now Available to Own for the week of June 3, 2014. Each week we run down new releases in movies, television series, and video games that you can enjoy in the comfort of your own home. On shelves this week, you can find titles such as Lone Survivor, RoboCop, Workaholics, True Blood, and more. Check out the complete list of new releases and see if you should buy, rent, or pass ’em after the jump. END_OF_DOCUMENT_TOKEN_TO_BE_REPLACED

With all of the hustle and bustle of Comic-Con 2013 during the day, don’t expect the festivities to die down just because the convention hall is closed at night. No, the streets of the San Diego Gaslamp district runs rampant with celebrities and attendees looking for a good times in all the right places. Now most industry parties are guest list only, but if you’re lucky enough to snag entry through a contest, are a smooth talker, or you know a guy who knows a guy who knows a guy, then you’ve just bought yourself the hottest ticket in town. Check out my SDCC nightlife adventures after the jump. END_OF_DOCUMENT_TOKEN_TO_BE_REPLACED 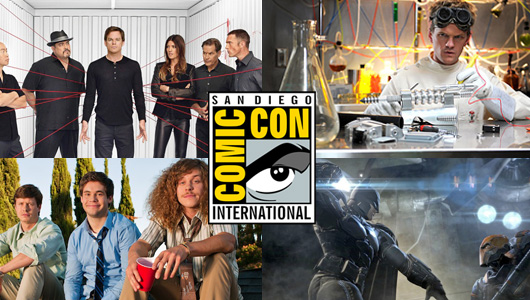 After waiting all day in lines, bumping elbows with fellow nerds, and walking around for a better part of the day, Comic-Con does not end when the sun sets. There are many fantastic parties where you may run into various celebrities, partake in food and drink, and obtain a lot of swag. Not only do these parties make the convention more enjoyable, but they make it unforgettable (depending on how much you drink). A number of these parties do require an RSVP or an invite, but there are a good amount that are still open to the public for free or at a minor cost. Check out the complete list of SDCC 2013 parties after the jump. END_OF_DOCUMENT_TOKEN_TO_BE_REPLACED

Here we are. The Big Kahuna. It will begin on this day, Thursday, July 12. With Preview Night offering a taste of the con, the real deal is here. Could the Mayans be right? Could this be the last Comic-Con ever? Well if it is, I better make the most out of it! Comic-Con is a smorgusbord of all things geek ranging from comics and gaming to film and television. There are many panels, seminars, and tons of hands-on playtime for any nerds freak flag to fly high. Let’s check out Thursday’s schedule shall we! END_OF_DOCUMENT_TOKEN_TO_BE_REPLACED