Most would say we are in the Golden Age of television. Everywhere you look there’s a new superhero show emerging or a fun genre bending procedural popping up. There are a smorgasbord of TV series on every channel for everyone, and fortunately for Comic-Con 2015 attendees there will be a bounty of panels to attend.  The Comic-Con 2015 television panels include the likes of HBO’s Game of Thrones, AMC’s The Walking Dead, ABC’s Once Upon a Time, TNT’s The Last Ship, Fox’s Gotham, The CW’s Arrow, MTV’s Scream, and the highly anticipated Supergirl from CBS. And don’t forget the popular animated series such as Archer, Bob’s Burgers, Rick and Morty, Adventure Time, and more. Check out the full list of panels below:

Welcome to your Netflix Streaming Report for February 26, 2015. After the long week you deserve a relaxing staycation with a bowl of popcorn, a bucket of ice cream, and only your Netflix queue to judge you. This past week, Netflix Watch Instant has been kind enough to supply us with RoboCop (2014), White Bird in a Blizzard, Powerpuff Girls, and more, which you can find after the jump as well as what’s leaving as of March. END_OF_DOCUMENT_TOKEN_TO_BE_REPLACED

And you thought Comic-Con 2014 was heating up with Community, Paramount Pictures, and Sony Pictures on Thursday? Friday’s schedule of panels for SDCC come in hot and heavy with the likes of Game of Thrones, The Legend of Korra, The Walking Dead, Kevin Smith, Bones, Agents of SHIELD, Arrow, and much much more! Check out the full line-up after the break. END_OF_DOCUMENT_TOKEN_TO_BE_REPLACED

With WonderCon less than two weeks away, the fine folks at Comic-Con International have graciously uploaded the program schedule. For Friday, April 18, fans eager to get their WonderCon on can expect panels from the 501st Legion, Cartoon Network, Walt Disney Animation Studios, and more. Badge holders will also be able to enjoy the world premiere of Son of Batman, as well as sneak peek screenings of The 100, Teen Titans Go!, and Revolution. Check out the full Friday schedule after the break. END_OF_DOCUMENT_TOKEN_TO_BE_REPLACED 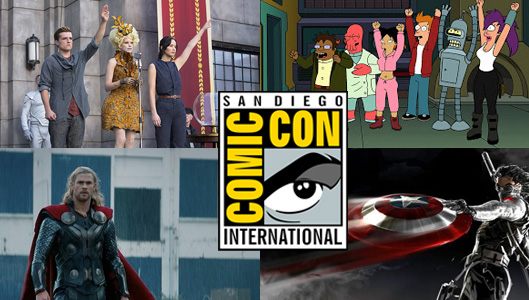 The big kahuna of Comic-Con 2013 is Saturday. No day is bigger during the convention than this. Comics, movies, television, and more will be bringing out their big guns. You can expect to find panels from Legendary Pictures, Warner Bros., Lionsgate, Marvel Studios, How I Met Your Mother, Futurama, Xbox, The 20th Anniversary of Pinky and the Brain, the 25th Anniversary of The Sandman, True Blood, The Vampire Diaries, and much much more. See the full schedule of panels for Saturday, July 20 of SDCC after the break. END_OF_DOCUMENT_TOKEN_TO_BE_REPLACED

As Comic-Con continues to grow, there’s been an outpour of exciting happenings all over downtown San Diego that allows fans of movies, gaming, and television to experience the convention without having a badge. This year is no different. Cartoon Network is looking to expand their fan-service even further with even more out-of-convention activities and fun. After the break, check out what panels you can enjoy, learn more about what’s outside the convention center, and get more details on the Ice King’s castle from Adventure Time. END_OF_DOCUMENT_TOKEN_TO_BE_REPLACED